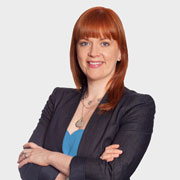 Halifax, NS — Meridia Recruitment Solutions Partner, Katherine Risley, FEC (Hon.), has been selected by Engineers Canada, with the support of Engineers Nova Scotia, to receive an honorary Engineers Canada Fellowship. This honour comes in recognition of the substantial efforts she has made over the years to improve female participation in the engineering profession in Nova Scotia.

As part of her work with Engineers of Nova Scotia, Katherine was on the team that developed the annual Spotlight on Local Innovation event which highlights multi-disciplined projects led by female engineers throughout the province and is held during National Engineering Month in March each year.

Katherine provides career advice and counsel to engineers both professionally and voluntarily to support their professional development and leads career sessions for students and experienced engineers. Katherine will also be speaking at the upcoming IEEE Women In Engineering International Leadership Summit taking place in Halifax, October 2019.

Katherine is a leader within Meridia’s recruitment team focused on the Engineering, Construction, and Operations industries. Her expertise, knowledge, and established networks have established her as a trusted advisor to both engineers navigating their careers and the organizations who employ them.